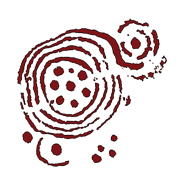 The Co. Kildare Federation of Local History Groups logo is a design taken from a late Neolithic stone carving found on a rock boulder unearthed east of Naas in 1975, and as such represents, possibly, the earliest expression of human culture in Co. Kildare. The following drawing and extract are taken from the JOURNAL OF THE CO. KILDARE ARCHAEOLOGICAL SOCIETY, VOLUME 15, NUMBER 5, ROCK ART FROM FORENAGHTS GREAT TOWNLAND written by ELIZABETH SHEE.

‘In Marth 1975 Mr. David Synnott of Furness House noticed some carvings on a newly exposed stone on his lands in Forenaghts Great Townland, Co. Kildare, about three miles east of Naas. Realising the significance of the carvings, he immediately notified the National Museum of Ireland of the discovery and the site was examined by the Keeper of Irish Antiquities, Dr. Joseph Raftery, who, in turn, informed me of the find. The decorated stone was revealed at about 450ft. O.D. during ploughing in a field just 200m south east of the medieval church of Furness (National Monument No. 394). Mr. Synnott has brought the stone to this church and it now rests against the outer face of the east wall of the chancel… 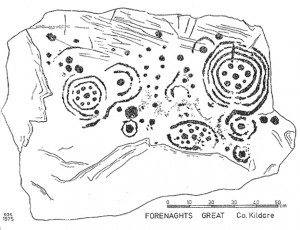 … it is difficult to avoid the generally accepted assignment of a late neolithic or early bronze age date for rock art such as that from Forenaghts, in round figures, say, 2000— 1500 B.C. Further research may well modify this view, or it may be shown that rock art has a much longer time-span than is at present thought possible. We must, therefore, accept the likelihood of the contemporanity of the Forenaghts decorated stone with the cist/standing stone and earthwork complex just 700m to the north. This latter site has been identified as a Class II henge monument (like phase I of Stonehenge) and as such should be dated to the first half of the second millennium B.C.’
ELIZABETH SHEE JOURNAL OF THE CO. KILDARE ARCHAEOLOGICAL SOCIETY