The area around Kill has been settled from the very earliest times.

Evidence of this can be found in the inscribed stones which have been found in the locality and whose rock art has been dated to the neolithic or Stone Age period. The most famous of these [The ‘Kilwarden’ Stone] is held in the National Museum.

The ancient [fragmentary] annals refer to the burial of nine kings of Leinster in “Cill Corbain” where their “war-like graves are made” and tradition locally has always held that this refers to Kill and, specifically, to the moat area south east of the village.

The name of the village itself denotes that there must have been a church (cell or cill) here from the earliest Christian period and it is likely that the present St John’s church stands on the site. The original dedication of the church seems to have been to St Brigid but this was changed when the area was taken over by the Normans in the 12th century.

Kill formed part of the ‘cantred of Offelan’ granted by Strongbow to Adam de Hereford in the sub-division of Leinster. Adam granted it to his brother John who was, in turn, succeeded by his son Thomas. Thomas had no sons so the land passed to Milo de Rochford who had married his daughter Eleanora. The manor remained in that family until the mid 13th century and thereafter seems to have passed to St Thomas’ Abbey in Dublin, who held it until the Dissolution of the Monasteries under Henry VIII.

After the Dissolution in the 1540s the manor was leased to Thomas Alen, brother of Sir John Alen, Lord Chancellor of Ireland. In 1551 it passed to Richard Aylmer and there is evidence of the existence of a borough at Kill in the early 1600s.

Kill was the scene of much action in the Confederate or Cromwellian Wars in the 1650s and Hartwell castle was used as a headquarters by the Royalist commander, the Duke of Ormonde at the time. Kill was also the scene of action – and many men from the area were involved in the fighting – during the 1798 Rebellion, as well as the later, abortive, “Robert Emmet” Rising in 1803.

During the 19th century the local landlords were the Bourke family, based at Palmerstown, one of whom [Richard Southwell] became Chief Secretary for Ireland in the 1860s and, ultimately, Viceroy of India where he was assassinated. Another famous Kill man was the Fenian John Devoy (1842-1928) who played a crucial role in advancing the Irish cause in America and, finally, in achieving political independence for Ireland. 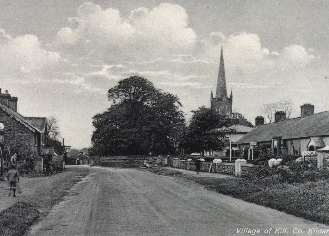 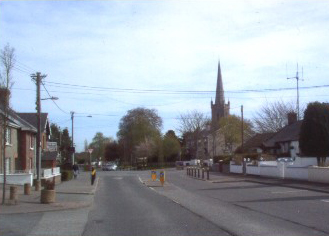